So now that the cat was out the bag with regards to the Tudor Rose now having a crew of 4, the day we had been excitedly looking forward to was upon us. So Tuesday 15th March came and scan day was finally here, we had left strict orders for my mum and Barry to fill the water tanks of the boat and tidy up ready to set sail on our return, and the most important task of looking after Scrumpy as unfortunately it was frowned upon to have a dog in an ultra sound. Holly and I were up early and set off on the nerve racking bus ride of 45 minutes to St Johns to the Doctors, all we had talked about with each other for the last 3 weeks was finally seeing Jellybean and making sure all was going well. We arrived at 9, 30 minutes before the appointment, and on entering the reception with beaming smiles of excitement on our faces, we were met by 2 middle aged women at their desks looking back at us shocked and confused……Baffled, we started talking but were cut off with ‘why are you here, did you get our email’. As you are all aware, internet is a luxury we do not regularly have, and it turns out that we had been sent a message at 6pm the night before to say the Doctor was in surgery this morning and would not be able to make our appointment. We were devastated…and after the receptionist asked us to rearrange for another day, we told a little white lie that we were leaving the country this evening and today was our only chance. She eventually said we could wait in St Johns and be phoned when the Doctor was back from his surgery, and hopefully have the scan then. As we wondered aimlessly about the shanty town that is St Johns, we stumbled across what would be the first Burger King of the day, we sat in for a few hours using the internet, giving me the perfect chance to finally get through to my Dad and Jan to give them the good news of their future grandchild. As the hours went miserably by with no phone call, we were not willing to accept defeat, so at about 12 we made our way back to the Doctors office to ‘put pressure on them’ (Not that we could hurry the Doctor in his baby delivering surgery….but as we walked in the receptionist was on the phone to him, and he was letting us know he was on his way back to see us.

Disclaimer – Even as I write this post from events that took place 10 weeks ago, we still do not know the sex of the baby but as I don’t like calling them it, will refer to them as she.

After what felt like an eternity of nurse exams, forms to fill, cups to fill, waiting patiently, waiting impatiently, and an hour long Q and A with the Doctor, Holly was up on the exam bed with jelly being rubbed onto the non existent bump…..and there she was, in all her plum sized glory, and if you squinted, with one eye open, whilst the light reflected of the screen, she almost looked like fully formed baby. Now through all the excitement of the last 7 weeks, of hiding our little secret, I didn’t quite have any expectations of how I would feel, or what would run through my head on this day, but all I know in the least soppy way is that as soon as she popped up on that screen, she had me….this little franticly moving thunderbird on the screen, was ours, to care for, love and look after for the rest of our lives. I have never been so happy and excited about anything in the last 31 years. For the next 30 minutes, we had a guided tour of the baby growing inside Holly, all was in order and she was growing perfectly, her little heart was beating like a strobe light at 154 beats a minute, nice and strong just like little Scrumpy. From little arms and legs, we watched as she moved around rapidly. We left the office with just 6 pictures in our pockets and the first memory of the rest of our new lives. A few more blood tests were needed and then it was off to or second burger king of the day….guilty as charged. We sat down and finally spent some time telling our friends and families about the upcoming new addition. Holly’s friends offered nothing but congratulation, and I don’t think a single one of mine believed me….it took the photos to prove it and relieve them of there shock and disbelief…it was a amazing feeling to finally let all the people we loved know…this was followed up with a Facebook post to let the masses know. All in all today had been better than we could have imagined and all we wanted was another scan every day from now until the due date.

For the last few months the baby secret and upcoming scan had dominated everything we did, it was nice to finally have everyone know, and we could get on with our cruising life. We moved the boat back round to Falmouth Harbour with my mum and Barry onboard, whilst Jan and Paul moved into a lovely little room at the Antigua Sailing Academy. It was a great set up, nice and quaint with its own pontoon, we anchored a few hundred meters away and spend the next week taking advantage of the open grass gardens for Scrumpy Dog, Wi-Fi, food, and endless mocktails (Thanks parents), we still live off our shoe string budget, but our parents spoilt us rotten whilst they were with us. Except for the 3 times we forced them to eat our cooking on board as a thank you, they took us to dinner, lunch, drinks and breakfasts for every day of their holidays. Holly’s mum had heard about Shirley Height, a must for Holiday makers out here, so we set off on a 3 mile ramble in the midday sun up to the top of the highest point on the island, only 3 of the 7 of us (Scrumpy is included) made it to the top walking, the remainder jumped in a taxi. The café and garden at the top is stunning and perfectly looks down into both English and Falmouth Harbour, you could even see all the way across to the coast at the other side of the island. Getting down on the other hand was far from simple, we were told of a half mile track that leads down the hillside to the beach, saving a long walk back. After checking in the restaurant that it was suitable for the slightly more elderly generation as well as the pregnant, they said it was fine, with a few rocks at the top but then plain sailing. An hour later, we still weren’t at the bottom, it wasn’t as easy and safe as suggested by the locals, and the scramble had led to a few knee injuries, but it had been worth it to see the view from up there.

Holly’s parents were all set to leave, it had been lovely to have them with us, especially that we could share the baby news with them in person. It was never planned to have our parents here at the same time (Just needed my dad and Jan to fly out as well) but it had worked perfectly. We had one last group outing to Long Beach to lounge around for the day which was a nice way to finish their trip. As we waved them off from the Sailing Academy, it was funny to think Paul was going home a grandfather for the first time, I don’t think either of them thought we would drop this news on them, but you could see how happy they both were.

This left Mum and Barry onboard with us, with the freedom to move around the Island. We got ready and did the small sale to Carlisle Bay for a night, followed by a sail back into Jolly Harbour, an a few nights in the Marina. They took us for a lovely meal at an Italian restaurant that was the fanciest we’ve had in a long time. Their last day being spent with a walk to the beach and cramming in as many Pina Coladas as possible before the generosity of parents ran out. It had been a great 3 weeks and lots had changed for us as well as our parents. We now had our new addition in the world for everyone to know, we had seen her (Or him) and we were getting even closer to finally seeing her. Finally our plans had been fixed and we had a timlines and dates to work with.

So with parents told we were able to plan for the next stage of our trip, although that next part would now mean returning to the UK. As a brief update so you all know our plan, it is as follows. The boat has been booked in to be lifted out and stored in Antigua We have booked our flights and will be flying back to the UK on the 2nd August, and if you like us enough to read this, we will be living at all your housing (We are not joking – We are homeless) don’t worry babies surely don’t cry that much????? We will spend 5 months at home and return to the boat with baby in hand on the 27th December, so we can have our first family Christmas with our families. All of this will happen with the most painful and costly part of the process flying in the hold of the plane in a cage, no not Holly, Scrumpy! 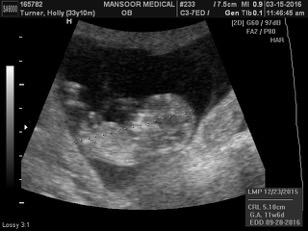 The first time I saw my Daughter/Son – Who knows

She is only the size of a Plum

The two ladies of my life…..hopefully a third is on the way

The amazing view from Shirley Heights