Whilst in Saint Lucia we experienced rain of biblical proportions, for 2 weeks solid the heavens opened up and pored down an ocean from above. Already carrying our fair share of animals on board including ants, termites, 3 different species of fly, mosquitoes, moths, and drug store beetles I nearly changed the boat name to The Ark and starting calling Simon Noah.
Rain is something that the British are fully accustomed to, but that could be described as a persistent cold drizzle this kind of precipitation is off the scale. Ok in a Tropical climate it’s not cold by UK standards but boy this stuff comes down in bucket loads. Now that’s all fine and dandy when you live in the protection of a nice dry house but not the case on a boat, which seems a bit ironic really so I’ll explain. 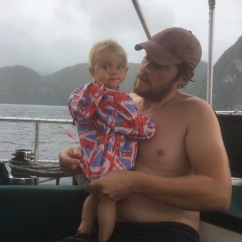 As you can imagine a yacht is already a pretty small environment to reside in, which means the cockpit is a very well utilised area. It’s the equivalent of a garden and being the Caribbean we spend a lot of time in our garden. The only shade or protection is provided by a small and in our case shit Bimini. (Its made of crap flimsy plastic instead of study stainless steel and partly held up by a DIY repair thanks to the wonders of cable ties). Rain makes it a no go area, everything becomes soaking wet and all the outside cushions have to come inside taking up half of the saloon making an already undersized environment even more puny. Hatches and portholes (windows) have to be shut making the boat hot, humid and very sticky.
Being hobos, in the tropics with a time consuming and distracting baby lots of items are often left laying around outside, so lots of things always get wet; Clothes, cushions, pillows, bags, towels. Once wet there is absolutely nowhere to put them which leads me onto Daisy’s room.
Life here is generally hot, really hot so in order to keep our home as cool and ventilated as possible portlights and hatches are left open through the night. Unlike windows portholes aren’t vertical, they are slanted, rainfall runs down the mast and coach house roof and into said portholes like a tap. Daisy’s room seems particularly damp and she often wakes in the morning chesty if there has been insufficient airflow. That why it’s vital that one of us wakes up to the Pitter Patter of raindrops and makes a quick dash to close up the boat. Needless to say Simon and I are not great at this and have a bad habit of sleeping through rain during the night. Really not good when Daisy’s cabin is one giant bed covered in cuddly toys, books and her pop-up cot.
On at least 3 occasions the bed and entire contents have been drenched beyond belief and this is exactly what happened during this wet period. So you can imagine life on board was pretty difficult for a while as now the space was reduced even more. There was no break from Daisy for either us as we were basically secluded to the back cabin the entire time to say things got a little intense is an understatement. 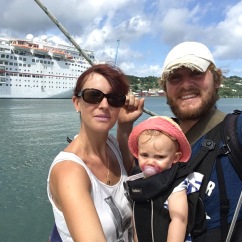 Anchored by a Cruise Ship in the Capital

Sunset in the City

Laughing in the face of adversity is one of Simon’s mantras from his military days, but by the end of the 2 weeks it was hard to funny side. Most of our time was spent in the Capital Castries which is not typical of the Caribbean as it’s a city (if you call it that more like a shanti town) and has no beach and dirty water but has great shopping for cheap odds and sods. Finally the sun eventually came out and the grey cloud hanging overhead was lifted along with our spirits……….. but fear not it didn’t last long

Stay tuned for the next post to find out why!!!!!

Its always lovely to come across other cruisers you’ve meet before especially when your least expecting it and during our stay in Saint Lucia we were really happy to see our old friend Kevin on Canper. If you follow the blog you may remember him from the infamous post about Cedeira, Northern Spain. This was only a few months into our trip so he was one of the first people we meet while cruising. Back then the boat hobos were novices but so much has changed and now we are in the Caribbean with a baby onboard

Kevin stayed in Spain for quite some time and we often talked of him wondering if he ever finally decided to leave and cross the Atlantic. Honestly I didn’t think he’d ever make it out of Spain so we were so pleased to see him in the West Indies. Only this time he had a tan, crazy long curly hair and had clearly been on the ‘boat diet’ but he looked really well. Spending the evening catching up and sharing stories over sausage and mash was just lovely, while Kevin consumed his body weight in his favourite tipple Coca Cola. He was even treated to a hair cut on board Tudor Rose with our clippers. Hopefully we will catch up again in Grenada but mainly because he prefers the company of Sir Scrumpington rather than us …….aye Kevin!!!!!