With everyone now gone there was nothing keeping us at Fort Du France, it was time to move on and visit some new unseen spots. Quiet and picturesque was top of the checklist as we’d had enough of these built up, busy tourist resorts.

Anse Noir was only an hour sail away and described as a lovely hide away in the pilot book. It was a tiny cove with a fine black sand beach, backed with palms and a steep junglely valley rising up into mountains and enclosed by small cliffs. A cosy little piece of paradise, I can’t remember the last time we’d stayed somewhere so beautiful.

We spent an afternoon snorkelling in the dazzlingly clear crystal water and watched the most amazing sunset behind Tudor Rose while taking Scrumpy for a walk on the beach. Dinner was served in the cockpit over candlelight where the place was deserted. The new cushions have transformed the outdoor area and now it is so inviting in the evening.

We relaxed and listened to sea lap against the shore whilst Caribbean night creatures buzzed and bleeped. The light from a single street lamp rippled across the water in golden streaks and the air was warm. I felt incredibly lucky that this was my life. I missed days and evenings like this just the two of us (three counting Scrump Dog). This is what the trip is really about, these memories and experiences. We maybe living on a shoestring but life doesn’t get much richer than this!

Tudor Rose in the sunset

Making the most of waking in bliss we all enjoyed another swim including Scrumpy and it is good exercise for baby jellybean and me. In the afternoon we moved 3nm down to Grand Anse D’Arlet a village set on a white sand beach with a fancy walk way running behind it and quite a large anchorage. As soon as we’d set the anchor we got straight in for another snorkel.

The water here was like green glass and we spend ages swimming around. We loved being back in clean clear seas again after the murky sludge of Antigua. Scrumps was accosted by a little black puppy and long haired sheep dog ashore while we scoffed Magnums on the dock and chatted to an American guy with a cute but old Jack Russell called Sophie. Unfortunately shortly after the poor guy fell off the pontoon into the water whilst getting in his dingy. He said he was saving his sunglasses that fell off his face but I think he was just saving face! We’ve all been there, its part and parcel of boat life but I did feel sorry for him.

The next day was a 15 mile passage to Sainte Anne on the Southern East point of Martinique which ideally should have taken between 3-4 hours but unfortunately the wind and swell were not in our favour. As we rounded the South West corner the wind was dead on our nose, even with the motor on we were making slow progress so we had no choice but to tack (zigzag rather than sail straight to our destination) with the motor and sail. We still weren’t going as fast as we’d like it was like watching paint dry. Then to make matters worse as we were undertaking a portside tack the foresail got caught around one of the stays which support the mast and ripped a big hole in it. Brilliant as if this wasn’t painful enough, now we’re just down to motor and the mainsail. After 6 and half hours and 20 miles later we were finally at our destination.

Deep fat fried pomm frities were well deserved and essential for moral so we got ashore as soon as we could only to find our take away was shut and nowhere else open and selling chips. We were gutted but luckily we managed to get a huge fresh, crispy baguette and real butter from the corner shop to dip in our lasagne instead.

Over the next few days we relaxed and pottered around the boat in Sainte Anne and the near by Marin which had excellent supermarkets (Leader Price & Carrefore). We repaired the sail with some patches of sail on the trusty John Lewis domestic sewing machine, the sails are starting to resemble a patchwork quilt at present. Scrumps had yet another trip to the vet for yet another Health certificate ready for customs in Saint Lucia. His import and export process is more expensive and complicated than anything else we have to deal with out here in the Caribbean. We even bought a little portable washing machine as we figured we’ll need it when we have a little baby on board making a mess and I am keen to use re-useable nappies. There are some really modern easy to use ones out on the market these days. Unfortunately it wouldn’t work with our 300w invertor (which converts 12v in the standard 240v you lot have at home) but we are hoping this will be resolved when we get a new 1200w invertor…. Watch this space. I know your all on the edge of your seats to find out!

Romantic meals in the cockpit 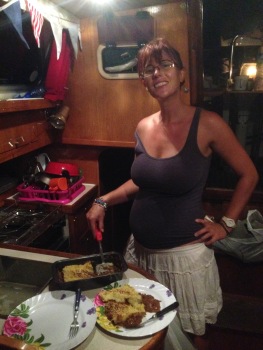 With Simon’s friend and former colleague Nick arriving in 4 days with his girlfriend Catherine it was time to say good bye to Martinique and its baguettes and pastries and get our arses down to Rodney Bay, Saint Lucia. We were really looking forward to visiting our old hunting ground particularly as this was the first island we had arrived at after crossing the Atlantic Sea.