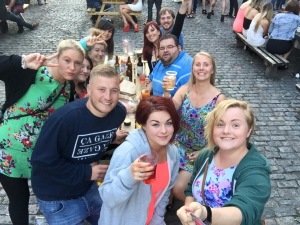 Last night was our leaving drinks in Bristol so that we could spend sometime saying good bye to all those who won’t be waving us off from Portland. It was so nice that so many made the effort to come and see us, we really weren’t expecting it & want to say a massive THANK YOU to everyone that came…. & don’t worry to all those that couldn’t make it. It was a bit totes emosh but one of our good friends said its not a good bye it just ‘see you later’ which put things into perspective……. but there will be tears no doubt …… at least from Holly defo not Simon.

We both renewed our passports despite have over a year left….wishful thinking maybe….but who knows what will happen we don’t have a time limit & we don’t want to get stuck in Somalia with an out of date passport although that would be pretty unlucky……Scrumpy’s passport has also arrived so all 3 of us are set to go.

The boat is finally repaired after spending 14 weeks being poorly and a number of choice words & unhappy emails from Simon to the boat repairers, however it seemed like water off a ducks back!

We have made good progress with our to do lists but still lots to do and we are yet to do the Epic Boat Provisions Food Shop, but we’re not too worried as we have been piling on the timber the last 6-8 weeks stuffing take aways!!! We reckon we have enough body fat to survive for at least a month & there is always Scrumpy’s 30kg of ‘Little Champ’ biscuits if we get really desperate.

Perhaps working right up to the last week (Simon finishes tomorrow Monday, Holly finishes Thursday) and then moving out Friday, with the tenants in on Saturday was a bit optimistic…. but hey theres no going back now so we just have to suck it up! Think we will sleep for 2 days before we sail anywhere as we’re so ty ty.

Please keep your comments coming as it makes us feel popular