Sooooo the bit you have all been waiting to hear …….the actually sailing stuff!!!!!

Weymouth – Dartmouth (55 Miles / 10 hrs)
We left Weymouth on Monday 3rd Aug at about 11am after taking Scrumps on a nice big dog walk in Nothe Fort Park. Coming across Portland was absolutely vile, we were getting smashed by waves ….poor little Scrumps did not enjoy it & neither did we.
Luckily it was only for an hr or 2 and then calmed down once we were away from the headland. We got in a good days sailing (no motoring) & after making good ground we motored when the tide started to go against us. It was a long day, 55 miles which took 10hrs but we were greeted by a pod of 80 or so Dolphins who entertained us when we were starting to get a bit tired. Capt Scrambles Scrat Bag tried to speak Dolphin & attempted to jump in with them but we convinced him otherwise!
We arrived at Dartmouth at 9pm & enjoyed a nice super on board & a late dog walk so Scrumps could pooh in a rather nice floral arrangement of a Union Jack …thats our boy! 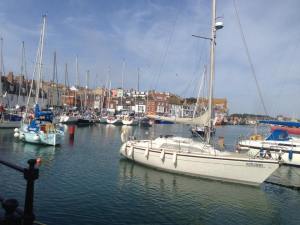 Dartmouth – Salcombe (14 miles / 3 hrs)
No lay in as we had to move from the Town Jetty to a swinging mooring, but spent the morning doing some admin bits (Chandlery, Showers, Dog Walk, Fat Face). Went out on the Tender with the outboard motor for the first time, such a change to rowing against the tide & getting threaders with each other!
Left around 1.30, coming out of the harbour was horrid again & the sea was pretty choppy all the way so as it was a short distance we decided to motor. We played eye spy to pass the time & asked each other random questions about each other to take our minds off the rough water.
Got to the entrance of Salcombe to be greeted by 100’s of boats, RNLI boat & Rescue Helicpoter …it was manic. When we asked we were told 2 local lads had just arrived back after rowing from NEW YORK! Everyone was cheering & going nuts & 100’s of people waving them in. Simon and I were disappointed when we realised it wasn’t all put on for us….. 😉 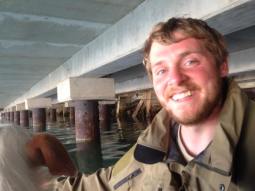 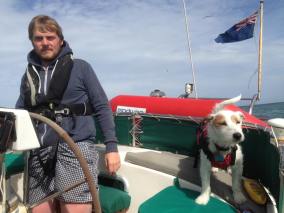 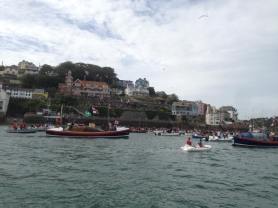 Salcombe – Plymouth (22 miles / 4 hrs)
Scrump Doggy Dogs Birthday today, took him for a walk in a bit of green overlooking harbour views & shared a giant Chelsea Bun (boat diet well underway!). Got some bones from the butcher as a treat for the pooch & treated ourselves to Dubarry sailing boots (they are an investment & we can’t wear flip flops everyday!!!!).
Sea state was disgusting coming out of the harbour into the channel (again!) I steered for a bit & then got sick of it so the man took over! We were starting to get a bit sick of being smashed around…. but finally the penny dropped & we put the main sail up to steady us. We still motored all the way to Plymouth, but did feel naughty for it, although I have now worked out a fairly comfy position for me and the dog so he is much more settled now ….& I wrapped him up in the leopard print blanket to keep him warm.
Got drenched with rain coming in & meet Simons brother Chris in Plymouth who sorted out a free berth for the night which is perfect for us Boat Hobos & we even had a visit from the Engineering Officer on HMS Protector who gave us some sailing tips… we made sure we tidied up first as he is an Officer after all!
Also tested out our new pressure cooker, which was scarier than the sea state as we kept expecting it to explode! The following saying springs to mind ‘a watched pot never boils’ …..we watched it for blooming ages & it didn’t explode so we considered it a success! …. went to the pub to celebrate but the birthday boy was tired out & curled up to sleep on a cushion. 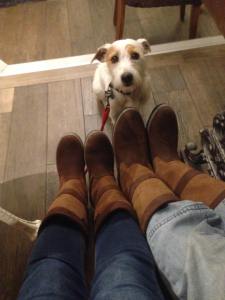 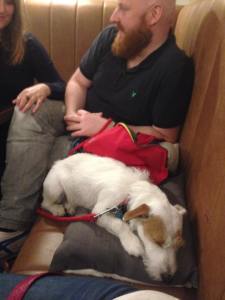