One of the main reasons we have stayed in Antigua as long as we have is not just because of all the socialising, although that has been great fun. We decided that we would also stay so that we could see the same doctor for our 20 week ultrasound (anomaly) scan. We’d already stayed to say goodbye to Tina & Mark and the scan was due about 3 weeks after they left, so it seemed the obvious thing to do and we thought it would be best for medical continuity.

Now any of you who read my blog posts will know that I’m not shy about being open and honest, that’s who I am as a person and I want to show people what life is really like living on a boat, not the perfect picture that some people like to paint. The day of the scan should have begun as happy and exciting, a prefect day in paradise. Unfortunately things had been a little tense the last 36 hours between Simon and me. We don’t often fall out but when we do it is very difficult, he is not only my partner but my best friend, my family, my colleague, my only friend to confide in. He has to have many roles, as it is just the two of us 24/7. We have obviously made friends on other boats, fellow cruisers but these relationships are not as close or intense. This means when you don’t get on you can feel very isolated and alone and it is exaggerated ten fold on a boat. There is nowhere to run and hide and it can be claustrophobic and frustrating, but that also means that you have to deal with it. With the prospect of seeing our little jellybean (now the size of a mango) we soon managed to snap out of our mood.

Nick and Teryesa looked after Scrumpy for us while we got the bus to St John’s. We think they enjoy his company as much as he enjoys theirs. The doctor’s waiting room was a far cry from the morning, as we laughed and giggled the whole time we waited to be called. I had my weigh in and blood pressure taken, Dr Mansoor was brilliant as always, he gave us a full update on Zika virus and based on the facts we don’t believe there is anything for us to be worried about. He also explained about RH negative blood issues, as Simon is positive and I am negative, but this just means I need some extra blood tests and jabs.

The scan was nothing short of amazing, it wasn’t as exciting as the first scan as we knew what to expect but it never gets boring seeing your little unborn baby on that black and white screen. It is fascinating how much than can tell from this simple scan, you can see everything all the tiny little toes, ventricles, valves and chambers of the heart, each perfect vertebrate of the spine, even every curve of its teeny ear. It is unbelievable, Simon and I beamed with pride at this amazing little life that we have created and squeezed each others hands for the entire 40minute scan.

It seems we have a rather active baby as he/she moved around for the entire scan making it virtually impossible for Dr Mansoor to take all his measurements. He asked us if we wanted to know the sex, which has been a big dilemma for us. We told him to see if he could tell first, but not to tell us. He said he was 85% sure he knew what sex it was. We are trying so hard to keep it a surprise for the birth but we want to know so badly, so he suggested writing the sex on a ‘post it’ note and sealing it in an envelope.

On the way home we couldn’t contains ourselves and opened it, even flicking through 3 of the ‘post its’, as he written it in between a wad of them but right at the last minute I bottled it and put it back in the envelope, I’d be so annoyed with myself if I didn’t keep it a surprise ………so for now little jelly bean your sex remains a SECRET!!!!!!!

So with the scan’s all wrapped it was time to move on, after 2 and months in Antigua we were getting itchy feet and wanted a change of scenery. I had some old colleagues working in Martinique that I wanted to catch and Simon’s friend Nick was visiting us in St Lucia in June so we had to get going and head back south. 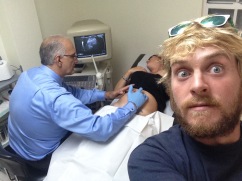