Skip to content
Muros – Bayona
On firing up the engine for the first time since the repair it was great to see that the hole was repaired, it wasn’t so great to feel a second smaller hole pumping out exhaust fumes. It wasn’t a lot and we decided we needed to push on. We had a 45 mile sail down to Bayona, this would be our last stop in Spain, and we were both looking forward to getting into Portugal, which was 15 miles south. On arriving we contacted the Marina to arrange our mooring for the night, they kindly came to greet us on the pontoon, on rounding the breakwater we saw a lovely, comfortable, FREE anchorage, so cancelled the Marina over the radio, much to their annoyance. Unfortunately with a weedy sea bed we struggled to get the anchor dug in the first 4 attempts, but we refused to crawl back to the marina with our tail between our legs, luckily we got firmly anchored in on the 5th attempt. We tendered ashore to take Scrumpy for a walk. For once it was not the usual monotonous walk, but we found a lovely old castle to stroll around and it had the most amazing views of the sky and sea this was a nice change of pace. We even played around with some giant Sculptures & got Scrump Dog Millionaire to practising his camera posing skills. The following morning we nipped ashore to get our Portuguese courtesy flag to fly once we crossed the border, and it was back to the boat to set sail from Spain. 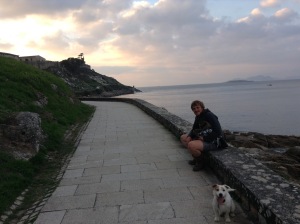 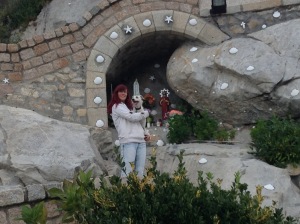 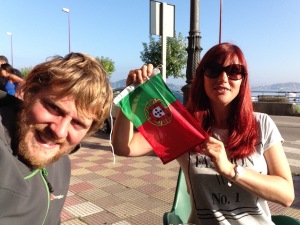 Bayona – Viana do Castello
Portugal here we come and new day and a new country how exciting although it didn’t feel as exciting as crossing France to Spain but I think this is because it was only a short sail past a river that boarders both countries so it didn’t seem as significant. Unfortunately with once again no wind we had to motor the majority of todays passage, another 35 miles. We had vowed to not use the motor and only go on passages in good winds, but with a deadline to reach Lisbon looming so we could meet Holly’s friend Michelle, we had to get some good old miles under our belt. The problem was, the insignificant second small hole, was now filling the boat with exhaust fumes even more than before. We spend the passage pretty much with our heads over the side of the boat in the fresh air to stop choking ourselves to death. I spent the afternoon on the phone again to the engine manufacturer who gave me some good tips for fixing the second hole as this was a more complex job, but once again this would have to wait until we were comfily in a marina. It was a lovely sunny day and Holly got in a good few hours topless sunbathing on the privacy of the cockpit. We rounded the breakwater to Castelo and pushed up the river, making our way into the Marina for another maintenance stop. We arrived early evening so had to make a quick dash to the chandlery for supplies so that I could crack straight on with the repair the following day, we had to wait until the engine was cool enough to take apart anyway. Gasket paper was top of the list, but unfortunately it was like gold dust not even the local car garages had any. However we were given some alternative options by a former colleague of Holly’s, thanks Angus, but it turned out that we didn’t need in the end anyway as the engine had re-useable metal gaskets! The first full day was spent with the huge help from Michael Johnson back on the end of a phone in the UK, taking the exhaust and cooling system of the engine apart, I know what your all thinking..…how the F**K could I do that…..well I thought the same but somehow it worked. I managed to seal and reinforce the manifold with the corrosion, the hard thing now was the 24 hour wait until it is dry to be able to fire up the engine to test it….fingers crossed.
Whilst we waited we spent the evening realising how much better Portugal is than Spain, its cheaper, better shops, better sail winds (so we’ve been told!), calmer seas, nicer food, and better restaurants….. well to be honest its a bit more like home compared to Spain so thats probably why. On finding a lush butchers we could eat kebabs and pork schnitzel until our hearts content for a 3rd of the price of else where. Holly even tackled the weekly food shop on her own, overcoming her fear of asking foreign shop workers for assistance, and managed to get the wheel barrow sized load of shopping back to the boat solo. Unlike the UK all the supermarkets have a butchers counter and if you want minced meat etc you have select the cut of meat & get them to mince it, this is brilliant as its all lovely and fresh but pardon my French …your fucked if they don’t speak any English. We treated ourselves to another disappointing tea in a restrauant…..shame as we saw so many nice restaurants but think we just made some fundamental mistakes with our selection and ordering.
The following day with the engine welds dry and solid, we put the engine back together, and the ‘MOMENT OF TRUTH’ was upon us……it was a nail bitting moment but Holly turned the keys, and the engine roared like a beauty. The first time we have actually liked the sound of it. We were surprised how self sufficient we were becoming with problems that were being thrown at us. With our Lisbon deadline closing and 7 days being lost to the engine in total we decided to set off at 2pm and make our way to Porto. There was a storm coming tomorrow, which was here to stay for 3 days, so it was either get stuck here, or in some where knew, so off we trundled with a perfect engine and big smiles on our faces. 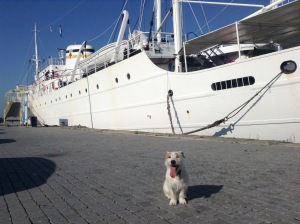 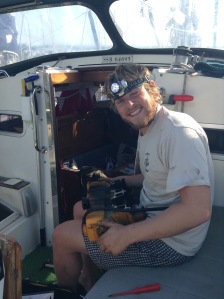 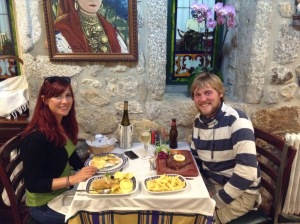 This baby is definitely slowing me down!!! #thismumruns #runningpregnant #pregnancyfitness #cantstopeating
An evening with great company, a dog walk on the beach in the drizzle, followed by a family nap on the sofa & finished off with tea & cake in peace & quite (while the other 2 sleep!) ...... 2020 has gotten off to cracking start!!!!! #happynewyear #bepositive #livefortoday
Christmas summed up! . . . #christmas #pudding #family
%d bloggers like this: