It was time for a day trip out, so all four us decided to make like the locals and get a bus, plus we are hobos and skint so didn’t want to pay for a taxi. It was a 15 minute walk to the bus stop and luckily buses are 10 a penny. Now we call them buses but they are basically people carriers converted to fit in as many as possible and whilst on board it feels more like a roller coaster than a vehicle. There is a driver & his sidekick who shouts out of the window whilst it is moving & blasts out Caribbean Hip Hop. If you shout back that you want to get on they almost run you over screeching to holt, the side kick opens the door pushes you on and you hold on tight for dear life. They have a set route or at least there is supposed to be a set route but if you pay a bit extra they will pretty much take you door to door.

Grand Anse beach and the Spice Island Mall was our destination. The mall was ok it was more than we’d seen on some of the desolate islands in the Grenadines but it was no Cabot Circus it was more like Broad Walk except without the Knowle East tracksuit crowd. We bought Scrumpy a toy from the supermarket, a proper supermarket as we hadn’t seen one since St Lucia! and then it was off to the beach.

Apparently according to our Chris Doyles navigation book Grand Anse Beach is exactly what you expect when you think of the Caribbean. It was 3 miles of white golden sandy palm backed paradise with crystal clear aquamarine water. Except it also came with hundreds of cruise ship tourists, American medical college students and every other man and his dog. For me personally this just isn’t paradise, I much preferred the natural, quiet unspoilt beaches that were hidden away on some of the smaller islands we’d been too, but Simon and I enjoyed a nice walk and found an odd little spice market with some stalls selling lush dirt cheap hobo priced food. Chris & Kerry making the most of their last few days of holiday opted for the big beach bar that sold gourmet burgers.

After having enough of watching loud greedy sunburnt holiday makers grow pinker in the Caribbean sun we headed back to the yacht at True Blue, so we could move over to the next Anchorage Prickly Bay. This turned out to be uber busy and again slightly uncomfortable, but it did have a nice little stretch of beach for walking the Rat Bay with his ball.

The following day was Sunday and we’d heard that Hog Island was the place to be for friendly Yachtie’s, as Rogers Ramshackle Shack Bar put on a beach BBQ. It was a pretty gross journey to get there thanks to some heavy duty wind and swell and it was the first we seen since arriving at the Caribbean, but we’d seen worse in Europe and it was nice and calm once in the protection of the bay. They weren’t joking when they called the bar ramshackle it more like a wooden hut, next to it was a little picnic area with benches and 3 big BBQ oil drums, unfortunately this had been hijacked by some local guys who were putting on a gourmet lunch of grilled lobster for another bunch of self indulgent cruise liners. They all arrived on a giant catamaran anchoring up onto the beach and spoiling the view for everyone else in the cove.

Now I am sure that lots of you reading this are Cruise Ship connoisseurs and I wouldn’t want to offend you, after all I am only jealous that I can’t afford a grilled lobster and glass of cold champagne for lunch, all provided at the drop of hat (and a large fee of course!)…But they literally swarm in on these quiet calm picturesque little places like a plague of locus and take over everything in sight. It is like the whole hatred between cyclists and drivers, if you’re a cruiser living on yacht then cruise ships are the epitome of the ocean. We seafarers live this life so we can experience different cultures, food and visit un-spoilt, untouched beautiful locations full of friendly locals and interesting wildlife. Then before you know it a floating high rise block of flats turns up, herding tourists like cattle and ferrying all but the kitchen sink ashore because god forbid Mrs Fitzgerald-Montague couldn’t possibly get her suede pumps wet whilst stepping of the catamaran and Sybil needs an olive and umbrella in her martini. She couldn’t possibly contempt a semi cold beer straight from the bottle from that awful looking shack over there! Not that I’m bitter and twisted of course.

Unfortunately Roger didn’t do a BBQ but a rather abrupt and slightly irritated Caribbean lady cooked up a storm of pasta, rice, potatoes, chicken legs in Creole sauce & some amazing spiced peas…. after all Grenada is known as ‘The Island of Spice’ and produces nutmeg, cinnamon just to name but a few. All this for just $25 EC (£6), so who needed grilled lobster anyway! Disappointingly we didn’t meet any of the social cruisers we heard about, just a party of French who had no interest in mixing with us and were probably fake yachties on a charter holiday anyway. However we did spent the afternoon chatting to a lovely warm group of locals who were having a family Sunday BBQ. The day was topped off with a swim back to the boat including the little fury ferret Scrumple Stiltskin who we struggle to keep up with!

With only 1 night left until they depart for Barbados we checked into the Prickly Bay Marina, so that it would make life easier for Chris and Kerry to get their suitcases ashore. Although labeled as a marina it was pretty much 2 rather dodgy looking pontoons, which you berth onto using stern lines and with a 2mtr gap and then 2mtr drop it was quite a jump to try and get off the boat! You had to develop a strategy, waiting for the current to pull the boat to wards the pontoon them jumping onto the top of a nearby pillar and hauling yourself onto the jetty. There was nothing graceful about it and it was a royal pain in the ass, especially while trying to launch a small dog at the same time!

Making the most of the little time Chris and Kerry had left we took our lives in our hands again and took the bus to a place called St Margarets, so we could check out the Seven Sisters Waterfall, which is meant the be the best of all Grenada waterfalls. It was a great day and we had a young boy as our tour guide who taught us all about the farming, preparation and cooking of nutmeg, cinnamon, breadfruit, pineapples, avocados, soursop, bananas, sapodilla and we loved smelling and touching the fruits. We trekked through a muddy rainforest path, past giant stems of bamboo as thick as you arm and as tall as a sky scrapper until we reached the natural falls. It wasn’t the most spectacular cascade of rainwater I’d ever seen, but it was still naturally beautiful and it felt invigorating to swim in the chilly but refreshing pool.

Chris jumped from the rocks into the second pool of water and Simon, needing to affirm his no existent fear of anything remotely dangerous or stomach churning obviously had to jump the taller one of the two falls.

In the evening as a thank you gift for having them aboard for 6 weeks Kerry and Chris kindly treated us to Chinese dinner in a nearby restaurant it was no Clifton Emporeur Court, but still a yummy luxury and we went to bed with full happy bellies but sad to send them off back to grey, wet, cold, miserable England.

In the morning we all waved them off including Scrumpy Dog who had to be woken up as he nearly missed it! They were both downhearted to leave behind boat life particularly Christopher but at least they still had 4 days in Barbados before it was back to reality. We felt awful for them, but we were looking forward to having some much needed time alone and getting the boat back to ourselves after nearly 3 months with guests …… well at least until tomorrow evening when Mr Mark ‘Pumba’ Felstead arrives for 2 weeks!!!!!!!! Ha ha 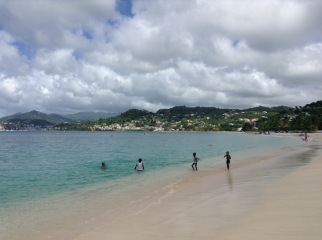 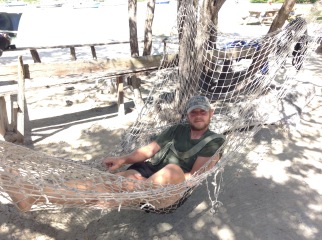 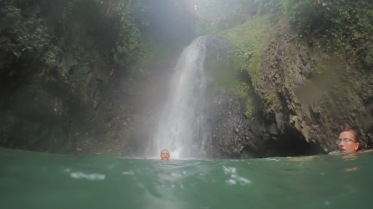 Another day ...another social distancing adventure..... this time bug collecting with Captain Daisy, Navigational Assistant Daddy & Captains Assistant Mummy. We found a ladybird, beetle, worms, slugs, spiders, butterflies, bumblebees, ants, woodlice, centipedes & 2 caterpillars 🐛!!!!! . . #lockdown #socialdistancing #anotherdayanotheradventure #bughunt #parentinglife #parentingthroughcorona
All I need to get me through 💕🤪....& only 12 weeks to go before our little boy arrives 💙..... . . #family #famfam #familyiseverything #funnyfaces #happinessis
If we can’t go to the cafe for a Saturday lunchtime fry up then we’ll just have to bring the cafe to us ..... thank you Daddy Bear 🐻 for our yummy Full English just the moral we needed! .....and doesn’t our front garden look luscious with the newly laid tuff. We’ve been working hard for the last 2 weeks to make this a nice relaxing space during lockdown, chatting to our neighbours & the people passing on the street all in line with social distancing. It’s certainly helping us & id like to think it’s also helping others who are maybe feeling a bit isolated & alone. . . #lockdown #stayhome #frontgarden #gardenrenovation #socialdistancing #outdoorspace #CafeJohnson #fullenglishbreakfast #bringingthecafehome #positivevibes #fryup #greasyspoon #family
%d bloggers like this: