We waved goodbye to Grenada, now in the knowledge that we have an extra little person on board. Well more like I have an extra little person on board my uterus. The plan was set sail to Pirates of the Caribbean territory in St Vincent’s and the Grenadines to show Pumba the true life of a rum-guzzling swashbuckler on the seven seas. We had a fair few miles sailing North to get to Carriacou another island which is part of Grenada, so didn’t arrive until just before dark. Picking up a mooring buoy on the Marine Protected Sandy Island for the night and waking up to a flawless strip of sand surrounded by crystal clear blue water and some great snorkelling reefs.

On the island whilst walking Old Sea Dog Scrumpy, Simon and I found a little picnic area shaded by palm trees and I noticed a fascinating pattern in the sand covering the entire area. It took me a while to work it out but then I realised it had been made from hundreds and hundreds of hermits crabs methodically dragging their shells along. It must have taken hours or possibly even days for them to create this natural work of art and I was devastated I didn’t have my SLR camera to capture it.

After a morning snorkel we had to visit Carriacou to check out of Grenada with customs and immigration allowing us to move on to Clifton on Union Island, which is part of St Vincent’s & the Grenadines. It was not very far and only a few hours sail and Pumba got a water taxi ashore as it was too windy and quite a distance in the worlds teeniest dingy. While Simon checked us in to the country (a long and painful exercise) Pumba enjoyed exploring the charming and colourful town, which turned out to be one of his favourite places.

Next on the list was Chatham Bay a peaceful, quiet and calm anchorage with a long sandy beach just a stone’s throw from Clifton. Where Pumbs finally go to catch a glimpse of some majestic Turtles, although despite his best effects he was unable to lasso and ride them like Captain Jack Sparrow. However we manage to get him ashore in the infamous red dingy, which didn’t look far off the back of a sea turtle and was just as challenging to ride. We enjoyed some drinks in one of the rough, ready but fun beach bars. I got to watch Pumba and Simon get drunk having now given up smoking and drinking thanks to my new passenger who has been nick named ‘jellybean’. I asked the barman if he could make me a virgin lime daiquiri with fresh lime juice, grenadine syrup and ice and he liked it so much that added it to his menu and even named it after me…so there are some perks to being pregnant!!!

The following day was a tour of Mopion, the tiny island of sand with nothing but a sun umbrella on it. Pumba and I managed snorkel all the way there and back through the strong current & very shallow areas of burning ‘fire coral’ making it through unscathed! But by the time we had finished it was too late to make across to Mayreau so in true pirate style we opted for Petit St Vincent an island undiscovered by the boat hobos. Once anchored all of us finishing off the day with early evening swim and a luxurious cold camp shower off the back of the boat. We floated the idea of pizzas in the restaurant ashore, the staple diet of a hearty sea dog, but it was a private island with an exclusive hotel for people with more money than sense. We would have had to sell our stolen treasure to afford a meal so we opted for a vegetarian satay (peanut butter) stir-fry as The Tudor Rose galley doesn’t have the extravagance of a fridge, but we went to bed content with fully bellies.

The next day we woke ready to head to Mayreau and then hopefully across to Tobago Cays one of the most spectacular spots in the Caribbean made up of reefs and 5 uninhabited islands.

Unfortunately today the sky was looking pretty grey, verging on black. In fact there was not a single hint of blue to be found. Which meant rain was coming! Making the assumption based on previous experiences here I expected there to be a monumental down pour followed by blue skies, so we just cracked on and set sail. Within 20 minutes the heavens literally opened into Niagara Falls. It poured and it poured and it poured some more and this time it didn’t stop pouring. Then wind began to pick up, growing stronger and stronger and it was long before a relatively calm sea started to generate tall and powerful waves. I hadn’t seen weather this bad for a long time and not since we left Europe, the Caribbean had spent the last few months leading me into a false sense of security.

Luckily it was short sail and it only took a few hours to get there, especially with all this wind. I wasn’t overly bothered by the weather and I didn’t feel unsafe so I am definitely getting desensitised to this stuff now. There was no way we could go to Tobaga Cays, the wind there is strong on a good day as the only protection is from the sea as the reef breaks the Atlantic swell but in these conditions it would be unsafe and no chance of getting ashore in the dingy without capsizing. After 3 days of paradise Pumba go to experience the other not so glamorous side of sailing. The wind stayed all day, so while Simon ventured to the Mayreau supermarket Pumba and I stayed on board to dry out, but by the evening all we wanted was some moral, so we managed to flag down a water taxi to take us all ashore and we enjoyed an amazing home made freshly cooked local 3 course meal of Callaloo Soup, bread & butter, vegetables, potatoes and dessert all included in the price and only £15. We were all stuffed by the time we got back to boat and it was just what the doctor ordered.

Later we found out that 9 people had lost their lives on a wooden powerboat that had over turned in that bad weather, so just goes to show Mother Nature is not a force to be reckoned with. We are always sensible and careful, putting in a big reef making our sails very small when there is strong powerful wind ………we might go slower but at least we are safe. 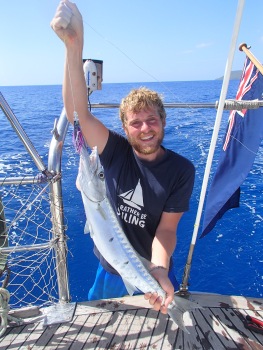