In exactly two weeks and three days we fly back home to England for five months, this wasn’t part of our original plan when we left but then again neither was having a baby. Not that Jellybean was an accident we kind of semi-planned it whilst crossing the Atlantic and figured we’d enjoy a boozy Christmas then just see what happens. Little did we know it would only take 2 weeks (must have been all that rum and sunshine) but when we found out at 5 weeks pregnant both of us were over the moon.

Having not thoroughly thought out the logistics of having a baby on a boat or the impact on our intentions of sailing to the USA we to had to do lots of research and have a serious think about where I was going to give birth. USA was out of the question unless we had £25-30K for medical care and being the first grandchild for Simon’s parents and my dad we felt that we really should have the baby back in England. There were lots of other factors but this really was the main one, it felt a bit selfish to not go home to share the arrival with family and friends. Unfortunately it is probably the most costly choice for us as Scrumpy’s flights are extortionate, plus our flights and the cost of lifting the boat and storing her in a marina (as its hurricane season in the Caribbean). In total it will be around £6-7K, a big chunk of what we saved towards the trip in the first place but I guess you can’t put a price on introducing a new baby into the family.

When we return it will be exactly 1 year since we gave up our normal lives in Bristol and moved on board our new home the Tudor Rose. This has got me thinking and reflecting over everything that has happened since we left and how our lives have changed. What a year it has been!

At first it just felt like we were on an extended holiday, not day to day living. Sometimes I half expected that we would turn around, head back to 104 Oxford Street and resume the ordinary existence of a Land Dweller. The boat was still just a boat, we lived on it but it wasn’t home.

Finding the nearest supermarket, hunting for a laundrette, exploring for suitable dog walks, learning to live without a fridge. It was all unchartered territory, so we had to slowly work out new routines for the simplest of tasks such as cooking, shopping, washing, showers. Just to add further complications to the mix there was also getting our heads around different cultures, currency and languages, whilst living on a strict budget. There is limited water on board and we have to regularly fill up the tanks do you soon learn to be very frugal with water consumption! Initially it was a bit of a fun, but when the novelty wore off I started to find it all quite stressful. Nothing was ever easy or straightforward.

It took much longer to settle in than I thought it would and I didn’t realise it at the time it’s only now looking back that I see it. An enormous part of adapting was learning to be flexible. If there was no launderette or it was shut for the duration of our stay in that particular port then the washing had to wait, sometimes this could mean weeks not days depending on where we were. Food shopping lists were often not worth the paper they were written on, as the only provisions available were from a little corner in a quiet Spanish fishing village.

When we left the UK I swore that no matter what happened I would never resort to hand washing our clothes. I made a promise that washing machines would be the one luxury that would remain. That was until of course we reached the Canary Islands, where one wash cost an outrageous €8. By this point we’d been budgeting for 3 months and with no income from working you begin you appreciate every single penny and so I had no choice but to embrace the economic ways of hand washing EVERYTHING! Lucky I did then as most of the Caribbean Islands don’t have self-service laundries and are even more extortionate.

I’d say it’s taken me at least 7 months to fully settle into this way of life. Perhaps part of it was because we were always on a mission to get somewhere. We had to reach the Canary Islands before November (within 3 months of leaving) ready the Atlantic Crossing. Then of course the crossing itself and all the planning/preparing that goes with it. Straight after that we had guests on board for 8 weeks with scheduled flights home and locations they needed to be at. Wanting to see as many places as possible meant we had to have a bit of a strict itinerary.

However after that it was just us; me, Simon, the dog, the boat and the Caribbean. Nowhere to be and nothing to do, we could go wherever we wanted, whenever we wanted and if we didn’t fancy doing something it didn’t matter. I started to feel much more relaxed without these outside pressures and content with life on board. Searching for supplies and exploring places became easier and was no longer a chore. I think I had actually finally got used to it and even enjoyed it.

When Simon first purchased the boat he was petrified to work on any of it mainly due to lack of knowledge and experience. Thanks to the wonders of the internet, such as you tube videos, access to instructions & manuals, forums and Facebook groups you can find out pretty much anything. Now he services the engine, fitted new batteries; solar panels & wind turbine, repaired holes in the engine. Also you will also be amazed at what you can recycle, we used cereal boxes as gasket paper when we couldn’t find any in Spain and I bought bicycle drinks holders for 80p and cable tied them in the cockpit instead of paying £50 for a posh teak drinks holder.

Very little is wasted when you live on a boat with modest finances and there is something very satisfying about being self-sufficient and resourceful. We have gotten so good at it that for the last few months the two of us have managed to live relatively comfortably on £400 per month and that’s for everything water, cooking gas, dingy fuel, food and other amenities such as washing powder, toilet paper. Even rainwater is collected for doing the laundry. It requires careful planning and we can’t eat out in restaurants or treat ourselves, but waking up every day in paradise is luxury enough.

I thought that I would miss having long hot showers, but now a wash consists of a swim in clear blue warm sea and a rinse with a cold hose and I really don’t miss my shower at home like I thought I would. The odd marina shower here and there fills the void and recently in Dominica I washed underneath a pitch-black sky with blanket of thousands of stars above me and as I swam little sparkles of bioluminescent lit up around me like fairy dust.

Dinner used to be more of a human necessity, rushed after a long day at work and often scoffed down whilst watching TV. Now they are a relaxed social event full of conversation over candlelight in the cockpit or watching the sunset over the horizon. The dreaded morning dog walk before an awful journey to work has been exchanged for a leisurely stroll on soft white sandy beaches, backed by palms trees and late afternoon is usually spent swimming in the warm turquoise Caribbean waters which are as clear as glass. 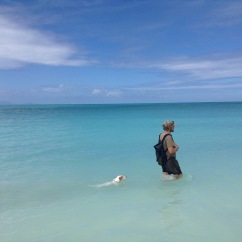 Of course not everyday is nirvana, some days it still rains, sometimes we miss our family and friends, sometimes we get sick of being skint and sometimes we just want normal home comforts. Things like a big king-size bed that doesn’t rock, a huge comfy sofa to spread out on, giant supermarkets full of everything you can think of, air-conditioning and no always having to get in a dingy to get ashore. However all this comes at a price, meaning that we would have to spend most of our lives working to be able to afford it all. A price that we just don’t think is worth it, but of course we don’t plan to live on a boat forever.

Doing it now means our little baby will get to be raised by two loving parents who get to spend and enjoy every waking moment with them. We won’t be tired or stressed after working all-day or worrying about childcare and they will get to see the world and that to us is priceless.

Here are some more photos from the last 12 months