The Air B and B (Accommodation we were staying at) was perfect, very relaxed, a comfy bed and air conditioning. Trish and John were lovely, and would do anything for us that made the transition back to this life so much easier. After an early night, yes you heard correctly, even though she has been perfect on and slept tons on the flight, little Daisy Bean, slept like a charm from about 7pm all through the night with a couple of non stressful feeds, the jet lag and air conditioning must agree with her. We were up early as we had lots to do, a quick breakfast, Holly unpacked and re packed the non essentials for me to take back to the boat, and it was off to the chandlery and to collect the hire car. A 45 minute car drive later and there she stood in all her former glory, albeit slightly dusty and sun swept, but no problems at all. The day was taken up with putting all the safety equipment back on board, fixing up the solar panels and wind generator, a general airing and tidy of the boat. The day had flown by so I rushed back to my girls who had been missing me loads! The following day was taken up doing the vital engine repair, that we had bought the spare parts from the UK for, this was long over due as it originally broke in Muros, Spain in September 2015, I never enjoy prolonged visits to the engine bay, but it is made 100 times worse when there isn’t a nice sea to jump in from the boat, this time there was only more tedious jobs around the boat. The final hours of the day were spent painting the Anti Fouling on the below water line areas of the boat and it was off to join Holly, Daisy and Scrumpy in the air conditioning.

We spent the night having a few drinks with Trish and John on their balcony over looking Jolly Harbour, all the while becoming more and more excited that I would be sailing our home round to join Daisy tomorrow. First thing the next day I shot up to the boat yard to put a quick lick of extra paint round the vital areas and before I knew it I was being craned in. A few checks later and it was time to fire up the engine…Oh! A mild spluttering that did not result in the soft purr of our trusty engine. Oh indeed! The next 6 hours I spend trying to start her, with the help from the boat yard, and some helpful fellow cruisers, but nothing, all I wanted to do was cry. With no buses running from this part of the island, I was extremely lucky to be offered a lift back to the accommodation to Holly for the night, and tomorrow I would take up the fight against the engine again. As I was locking up the boat the go and catch my lift I tried the engine one last time, and boom, she started just like normal, sounding perfect. A bewildered look left on my face, as 2 minutes to spare, I realised that a seized alternator had been the culprit, and the engine was absolutely fine.

Finally the morning came and on reaching the boat, she started first time with the alternator disconnected and I untied the lines and off I went. It was a 15 mile sail and I had envisioned it would take 4 – 5 hours, whilst I go easy and get back used to it. The boat and the sea had other plans, in the beautiful sun and nice wind in the perfect direction, we flew round, averaging nearly 7 Kts (That is amazing for this boat) and arriving to Jolly Harbour to collect the crew. I do not know whether it was the whole absence makes the heart grow fonder thing, but this had been one of my favourite sails ever. I moored up single handedly and surprisingly excellently…if you remember this is Holly’s job, and it was off to find the 3 missing parts to the boat! 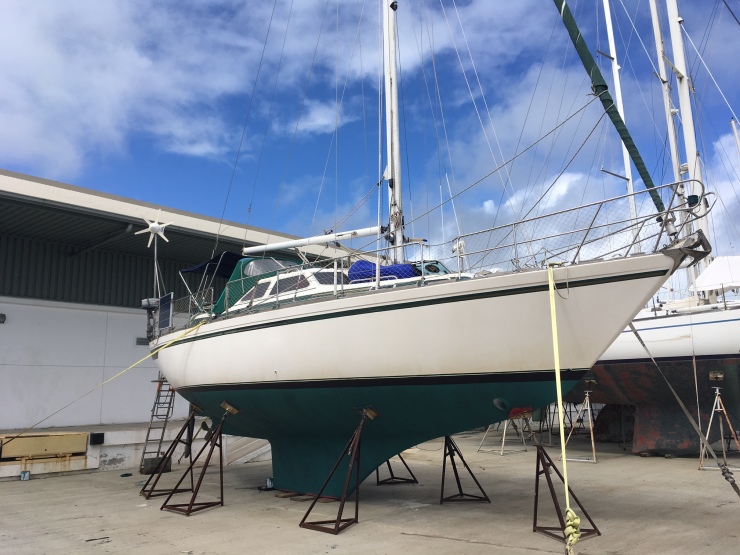